Located in the eastern portion of the town of Brookhaven sits what is now known as Brookhaven National Laboratory or BNL. The lab exists on 5,265 acres of land that was once occupied by Camp Upton—a military encampment that was named after a Civil War general, Emory Upton. The initial purpose of the camp was to train American soldiers during the First World War, and it was reactivated for the Second World War for training purposes, for a hospital, and for an internment camp for Japanese Americans.

After World War II ended, the camp was no longer needed. Its buildings and materials were taken apart and sold at auction to the highest bidder, and the material was shipped as far as Washington State. Since the land was already owned by the federal government and was in a pristine location, local politicians wanted to continue using the camp. It was decided to convert it into a research facility for peaceful uses of atomic energy, thus creating the Brookhaven National Laboratory. Eventually, the land and facility were turned over to the Department of Energy. 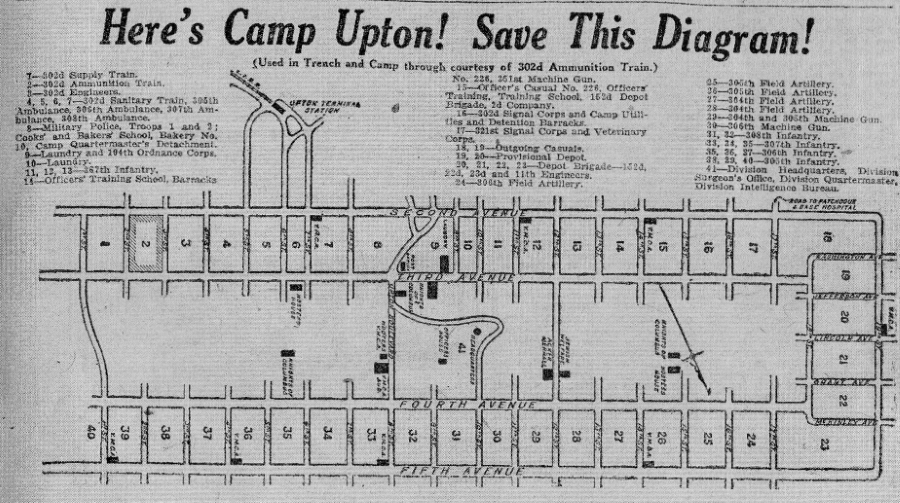 It all started when I moved to East Yaphank. Being an explorer and a huge history buff, I wanted to venture out, especially knowing that Camp Upton once covered my house’s land. Venturing outside, I took a trail that followed the Long Island Rail Road’s tracks east. I stumbled upon a strange structure just to the south and decided to check it out. To my surprise, it was a solid, concrete structure that had three walls still standing with amazing arches and graffiti everywhere. My mind went whirling. What is this, and why is it here? Trying to keep logical, I thought it may be a building from when Manorville was farmland, or maybe, just maybe it was an abandoned structure from the old Camp Upton. Maybe this was where all the troops came in from. What a grand sight that would’ve been. Everything supported this; it even had a stop for the train to bud against.

Searching online, I found near to nothing regarding this mysterious structure; however, over time, I kept visiting it and eventually found an old water tower along with a pump house. The Internet sources I consulted only showed Upton Junction and the camp’s station itself, both being on the northern side of the tracks. So what could this structure be?

Fast-forward to a couple years later. My friend wanted to know where this was. Seeing as I enjoy a nice walk through some abandon places, I decided to show them and to try and take some more pictures. Once again, my mind was wondering what this place could have been. He, too, was wondering. I posed the possibility of it being a train station once again but cautioned that I was not 100 percent positive. We also made our way back to the junction where the turned-over water tower still lies on its side. This time, I noticed a trench I forgot about—a trench that once belonged to the western “wye” of the Upton spur. I realized this was more feasible since the tower is too far from the main track to reach. Doubt was in my mind, however, since today’s entrance—once the eastern entrance—is a lot farther east. I was right to assume this to be the western spur; however, after reflecting on numerous historical images and maps.

Knowing that the junction was definitely the eastern and western entrance into the original camp made searching for this structure a tad easier. I just had to search what was to the west of the junction and find out what exactly sat there. An easy feat? Not really. Searching for maps that have identifying marks is hard; finding maps that have words and labels from that time period is nearly impossible.

Starting off with maps, I noticed from a website I use that a few maps dated 1904 and 1926 showed a small square situated exactly where my mystery building sat. However, on a 1949 map of the same spot, the building disappeared. This tells us that this structure dates back to 1904 and was closed and forgotten about sometime between 1926 and 1949.

Digging a bit deeper we come across a map that was published with an outline of Camp Upton itself. The camp stretched from today’s Route 25 all the way down to the Long Island Rail Road; then for some reason, there was a smaller portion that stretched down to Montauk Highway. It seemed to make the camp form an “L” shape. This map produced by the Department of Interior also showed a structure located between today’s North Street (once Manorville Road) and the Long Island Rail Road’s main branch.

This is where things get a little out of control.

Searching further, we finally found proof of a separate station located on the Long Island Rail Road’s main line; this station was once called Upton Road Station. According to records, it was located just east of Upton Road—once the main entrance to the army reservation, prior to William Floyd being built. There are records of this with the Long Island Rail Road itself on memos and tickets.

While the fact of Camp Upton having more than two stations is a little-known fact, it’s even rarer to have the knowledge of a third station. A little memo is the perfect indication, dated January 22, 1918, by the Long Island Rail Road Office of Superintendent: “Extra train leaving Camp Upton Terminal at 5.10 P.M for Manorville will make “s” stop at Camp Upton Station on Main Line.” Camp Upton Terminal? Camp Upton Station on Main Line? What are these places? We know that the railroad would be pretty specific with names when communicating information so nobody was to get confused, so what is this Camp Upton Station on the Main Line, and why was it making a stop there on its way to Manorville Station? This is when newspaper digging comes in handy, but before that, I did a quick search once more, which is when I realized I had missed an article that was linked to from one of the sites. The article in question is one dated August 23, 1917, and was published in the Engineering News-Record Vol. 79. This was the key to everything. In this article, it shows a map of the camp exactly as it was in the one produced by the Department of the Interior’s 1904 map, the only difference being that this mysterious building, sitting on the southern side of the Long Island Rail Road’s main branch, had a label on it showing “Camp Upton R. R. Station.”

Now, what about the Upton Road Station? We know about the Camp Upton R. R. Station and now know where it is located, but what about the Upton Road Station that we read about before? Well, apparently in 1918, the Long Island Rail Road had plans to relocate the station. In a memo dated May 24, 1918, the Office of Superintendent of the Long Island Rail Road made announcements that effective May 28, 1918, “New station and platform designated as UPTON ROAD located on north side of main track at a point about two miles west of the present Camp Upton station on Main Line is in service. Trains will stop at Upton Road and discontinue making stop at the former Camp Upton Station. Passengers will be received and discharged from north side of trains at new station. The terminal station at the camp is designated as “Camp Upton.”’

The Upton Junction was an intricate and vital interchange for the Long Island Rail Road and Camp Upton while it was active for both World Wars. Here conductors and guards would turn a switch on the tracks that would allow the locomotives to leave the main line and enter the camp. Once in the camp, the trains would travel a small distance to the Camp Upton Terminal where it would unload recruits and materials for the camp itself.

Based on the facts that were provided and researched on, I can safely conclude that Camp Upton, now Brookhaven National Laboratory, once had a total of three passenger rail stations: one station being the Camp Upton Terminal located inside the reservation itself, another being the Camp Upton R. R. Station, and the final one being the Upton Road Station. We can also conclude that the stations were part of a more intricate system with the Camp Upton Junction, which helped with the numerous trains that entered and exited the camp during its active days.