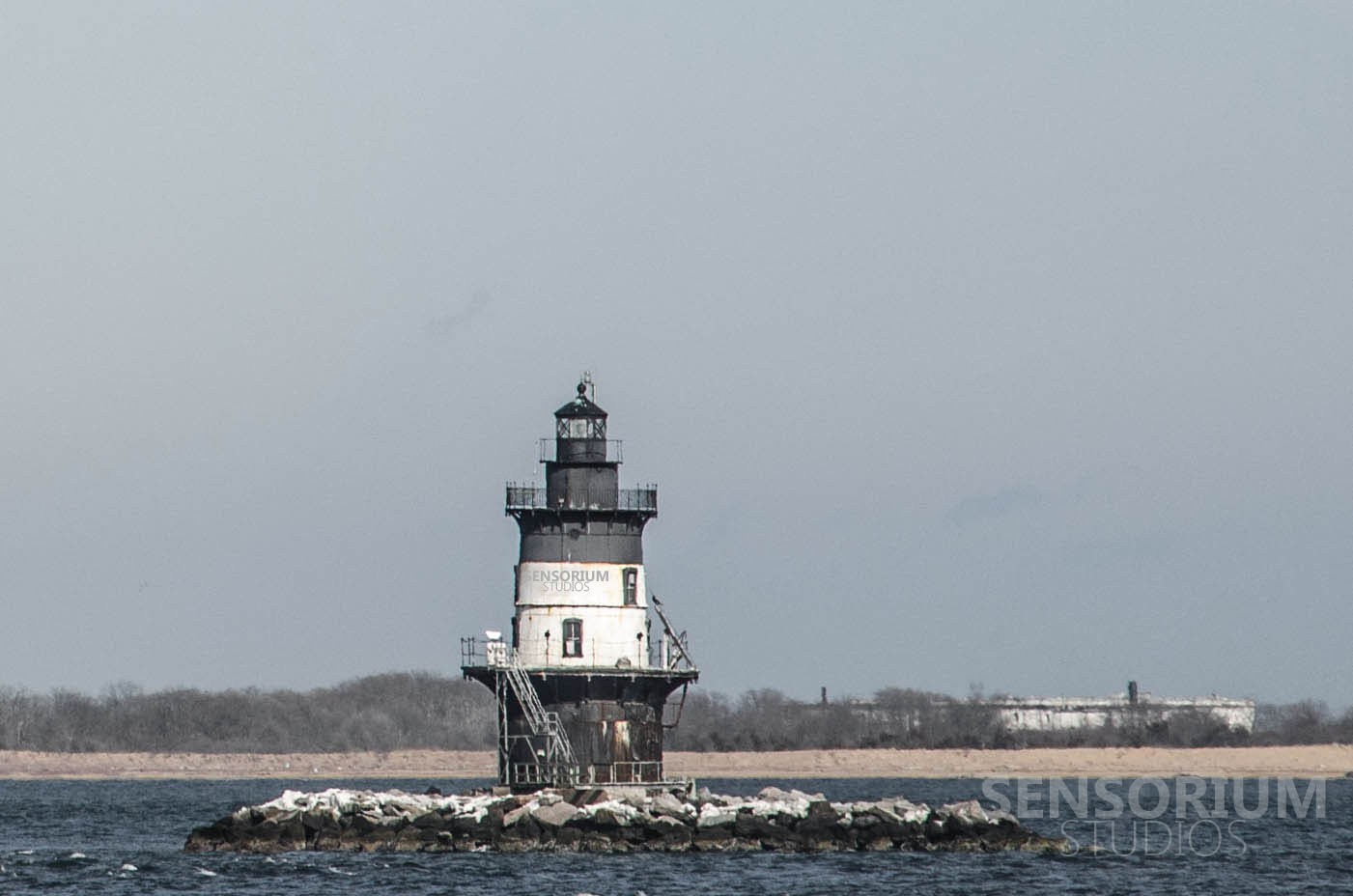 If you’ve ever visited Orient Point for a ferry ride, or coming home from Connecticut you’ve sure seen this coffee pot lighthouse. Sticking at the Eastern end of a reef, this Lighthouse signals your return to Long Island, or as a welcome to our beautiful home.

The reason for the Orient Point Lighthouse is due to the narrow gap between Orient Point and Plum Island. This gap is considered to be Plum Gut and at ebb tide, the waters from Long Island sound will rush through at currents exceeding five knots. This rush of water from the sound causes a churning mix of white-capped waves and dangerous riptides that can be challenging to the most experienced mariner. Oyster Pond Reef, is also laying just beneath the surface of the water, and extends about one-third the way across Plum Gut, make it even more dangerous.

In 1855 the lighthouse Service had a day maker placed on a large boulder at the very west side of the passage that wrote: “A Wrought-iron beacon had been designed for this locality, and the iron-work manufactured, under a previous superintendence, composed of a center shaft seven inches in diameter, rising thirty feet above low water, surmounted with a basket-formed cage-work. Five iron posts, five inches diameter, being established regularly around it at the distance of three and a half feet, and rising to the level of high water, to the tops of which the center shaft was to be braced by iron stay rods, one inch and three-quarters diameter, the heads of the former being connected by similar rods, all these post.”

Due to the “uncommon hardness of the rock” and the “derangement of the temporary staging, caused by a trading vessel running foul of it in the night” had delayed the completion of the lighthouse. Finally in 1874 a pyramidal stone beacon was constructed. the structure was surmounted by a shaft and iron cage that was placed on the reef.  this beacon was carried away however by ice in 1896. The first lighthouse in Orient Point considered, was to be a simple light beacon with a fog signal that would’ve only cost $5,000. But after considerable debate, they decided to build a caisson tower, composed of curved cast-iron plates, that were to be bolted tighter through flanges on the inside. On Jun 4th, 1897, Congress had approved $30,000 for a lighthouse to be erected not the far end of the reef, and built directly on top of the reef, this was deemed more beneficial to the mariners.

In 1898 construction on the lighthouse had began, however due to high storm winds, the structure was damaged and sunk. the follow spring brought new materials in, and successfully allowed the concrete to be poured. By september of 1899, the majority of the structure was in place.

By November 10th, 1899, the lighthouse was completed and was affixed with it’s very first fixed red light. This sense was a fifth-order sense, but was quickly replaced on May 1, 1900 to a fourth-order sense due to being too weak. The lighthouse was also affixed with a blower siren, which consisteded of two, two and a half horsepower oil engines, a blower, a siren, and a trumpet, on June 1, 1900. In 1905, the fog signal was upgraded to a second-class Daboll trumpet. The fog horn was on for 400 hours each year it operated

Prolonged exposure from ice floes and winter storms had caused consistent strains on the lighthouse’s sheet metal body. Over the next three years over 9,000 tons of ‘riprap’ were used at the base of the structure, creating a protective breakaway.  The work also sat on the reef and was 26 feet wide and 32 feet tall. Almost as tall as the lighthouse at tower itself, at 45 feet tall. Rust and cracks were also found on one side of the foundation, which required more plates to path. This extra weight actually caused the lighthouse to tilt about 4 or 5 degree’s, which some people believe this is actually due to currents undermining that sides foundation.

This style of lighthouse was the result of more expensive architecturally appeasing designs, and was nicknamed the coffee pot by local mariners. Starting in the earliest twentieth century however, with the introduction of automobiles, the coffee pot name was replaced with the “spark plug” term.

On April 5, 1958, the Coast Guard Cutter Hawthorne had arrived at Orient Point Lighthouse, and removed the station’s furniture and personnel. The Coast Guard had replaced the keepers with “Micro-switches and solenoid valves”.

In 1970, the Coast Guard had announced that the Orient Point Lighthouse was too unsafe for personnel and had become too expensive to repair. Their plan was to demolish the tower and replace it with a “reinforced pipe tower”. A citizens’ campaign was created and the Coast Guard eventually backed down. A company by the name of Chesterfield Associates was then hired, and pumped concrete into the base of the tower, sandblasted the tower, and covered it in a new coat of paint and epoxy preservative restoring it to its original glory.

Somewhere in the 1980’s the Coast Guard had giving Orient Point its current paint job and in 1988 the Coast Guard would again return to the lighthouse to gut it from its Fresnel Lens, replacing it with a modern optic, and again in 2000 removed the emergency generator and storage tanks. The underground power connection to the generator on Long Island was replaced by a Solar  panels. They also installed a newer boat ramp, leading to a less hazardous structure.

In June of 2011, the Coast Guard had declared the lighthouse to be excess property and not necessary to their needs, and was made averrable to eligible organizations for sale under the National Historic Lighthouse Preservation Act of 2000. The lighthouse was eventually sold off on September 18, 2013 to the tune of $252,000. The new owner is Randy Polumbo, an Artist and the owner of Plant, a New York City construction company

The Orient Point Lighthouse cannot be reached by land, and is not open to the public. You can view the lighthouse from Orient Point, private vessels, as well as the Cross Sound Ferry. If you choose to travel by your personal boat, please be careful of the shallow reefs that surround the lighthouse.