Material: Keepers House is made of Granite Ashlar Blocks the light tower is made of Glass & Iron 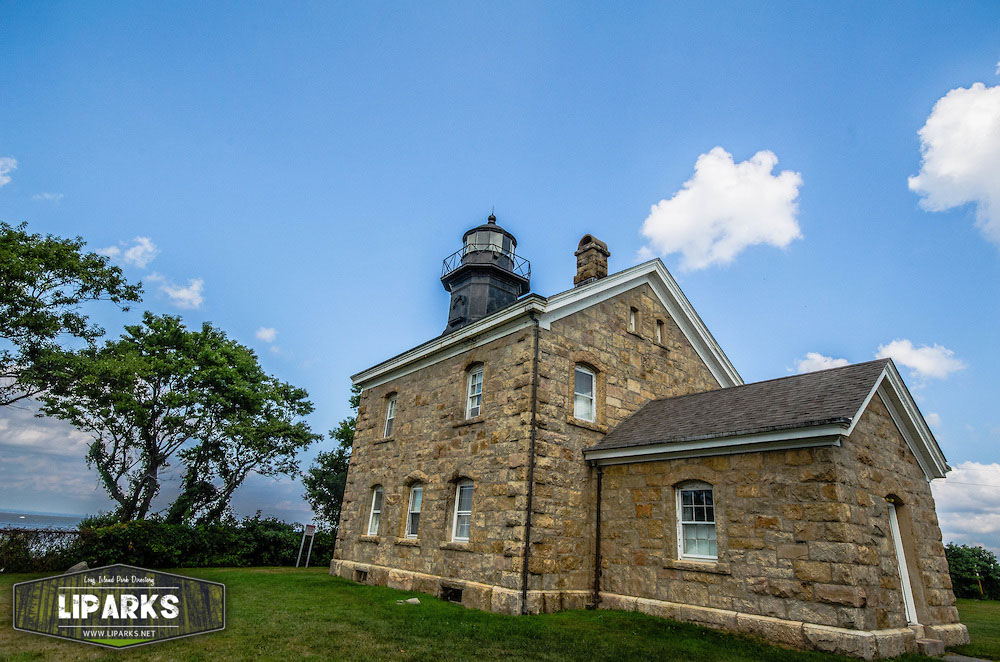 Prior to 1823, there were no lighthouses along the shores of Long island from Eaton’s Neck to Little Gull Island.  In recognition of the increasing maritime traffic, Congress, in 1822 and 1823, provided funding in the total amount of $4,000.00 for the construction of a lighthouse at Old Field Point near the entrance to Port Jefferson Harbor.   The land was purchased from Samuel Thompson for the sum of $400.00.

Construction of the 30 foot tall octagonal stone tower and separate one and one-half story keeper’s house (made of rough stone) was completed in 1824 and, quite amazingly, 75 cents under budget!

Harlan Hamilton, in his book, Lights and Legends, points out that the light had nine whale oil lamps arranged in a lantern magnified with parabolic reflectors.   While the first lighthouse is gone, the original keeper’s house remains and is situated to the east of the current lighthouse.

Shortly after the Civil War but before the arrival of the railroad, a second lighthouse was constructed to accommodate the increasing shipping traffic of Long Island Sound.  Construction of the second (and presently existing) lighthouse, built in front of the original, began late in 1868 and was completed in September 1869.

The lighthouse, constructed in the Victorian-Gothic Revival style is similar to the Block Island North Lighthouse (Rhode Island), the Morgan Point And Sheffield Lighthouses (Connecticut), and the Plum Island Lighthouse (Eastern Long Island).

The new lighthouse is considerably larger than the original.  The main building of the two story structure measures 30 feet wide by 32 feet long, with the rear one story anteroom about 17 by 19 feet square.  The walls, 28 feet high from basement to attic floor, are made from massive two feet thick granite ashlar–blocks of stone hewn or squared for easier and truer construction.   In front of the lighthouse, facing Long Island Sound, is an entryway which served as the main entrance to the lighthouse;  for visitors, tradesmen, lighthouse inspectors, and seaman all came by boat in those days.  The glass and iron octagonal tower, twenty eight feet tall, stands 67 feet above the Long island Sound. The circular beacon area at the top of the tower is six feet in diameter and surrounded by an iron platform.  Originally, the tower was painted white but, due to maintenance and durability issues, is now painted black.

The original light in the new lighthouse was a fixed white light with a continuous steady beam.  The old reflectors on the light were abandoned in 1856m before the new lighthouse had been built, and were replaced by the fourth order Henry-LePaute Fresnel lens, a “4th order lens” that was the most commonly used type on Long Island Sound lighthouses.  It was bright enough to mark the coast and entrance to Port Jefferson Harbor and, in theory, was visible for 13 nautical miles.  Kerosene was first used to power the lamp.  Today, the electric unit flashes alternating red and green every thirty seconds.  It has a 500 watt light with a range of thirty miles.

In 1933, the federal government deactivated the lighthouse, removed the light from the tower, and replaced it with an automated gas light erected on a 50 foot skeleton steel tower built next to the lighthouse.

Two years later, in 1935, the lighthouse property was conveyed to the Village of Old Field for “public park” purposes.  However, after Pearl Harbor and the American entry into World War II, the federal government seized the property for purposes of national defense.  A small Coast Guard contingent occupied Old Field Point.  Following the end of the war, the lighthouse was returned to the Village of Old Field.  In the summer of 1991, the Coast Guard returned the light to the lighthouse tower room where, under Coast Guard supervision, it once again sends its beam across the waves.